A lot of emphasis has been placed on the #MeToo movement which brings awareness to the sexual harassment that women face in the workplace and beyond. It is a powerful movement becomes it brings to the forefront voices and concerns that previously went unheard.

Before this, women’s voices were heard through the suffragettes and then much later, by members of the women’s liberation movement which most people think began with the outspoken voices of individuals like Gloria Steinman.

During WWII women heard the call and responded. With so many working-age men serving in the military, necessary jobs were understaffed. In 1943 a Norman Rockwell painted a poster that was to entice to women to leave homes and do something to help the United States win the war. While Rockwell’s painting might have been the first, it was J. Howard Miller’s depiction of Rosie Riveter, wearing a red bandana and flexing her biceps accompanied by the words We Can do It! that inspired women to take on traditionally male jobs such as welding, riveting and construction.

The movement was not embraced wholeheartedly. A wave of women entered these fields in unprecedented numbers. According to history.com, more than 310,000 women worked in the aircraft industry and a comparable amount worked in the munitions industry. Many men refused to work side-by-side women until ordered to do so.

A sterling example of the impact of these Rosies is in Richmond, California, at the site of Kaiser Shipyards to honor the Rosies who helped to produce 747 ships, more than any other shipyard in the United States. The shipyards worked twenty-four hours a day, seven days a week. Over 90,000 employees struggled to assemble the ships, which were created in sections that were then lowered into place.

Women came from all over the United States to learn welding, riveting and various construction skills in order to build ships that were needed for the war effort. The call for help was so successful that the city of Richmond grew from a population of 24,000 to over 100,000 in just a few years.

Kaiser was a brilliant entrepreneur. He employed his own drafts people, many of them women, to replicate the mandatory designs for Liberty and Victory ships that moved soldiers and materials all over the world. In fact, large equipment such as jeeps were disassembled into segments and then crated. Once at the site, the equipment was rebuilt. In this way the holds could be crammed with materials.

He understood that these women were doing the same jobs as men, with the same level of training and under the same working conditions. Because of this, Kaiser paid the women the same wage. He also realized that many of the women had school-age children that needed a safe place to stay while their mothers worked. To alleviate the problem, Kaiser offered Child Care Centers at their industrial sites that were run by highly skilled teachers. The kids received an excellent education in safe environments. This was a novel idea at the time, and still would be considered such today.

Another benefit was health care.  Kaiser understood that more Americans were dying in Home Front accidents than on the battlefields. He knew that only healthy workers could meet his grueling demands and construction needs.

When workers got hurt on the job, because the nearest clinic couldn’t handle the explosion in population needing services, many hours of valuable time were lost. So Kaiser built a field hospital at the shipyard in 1942 that encouraged prepaid medical care at fifty cents a week. Two years later more than 92% of Kaiser employees were enrolled in the plan, which was the first of its kind in the nation. It featured group medical practitioners, prepayment and substantial facilities at a moderate rate.

Another problem was housing. Workers arrived to find no suitable place to live. Many slept in the all-night movie theaters and a huge number shared beds with at least one other worker. Because there were three shifts to work, someone could be in the bed during the morning shift, someone in the afternoon, and a third at night. Today we would find this unacceptable.

Rosies are slowly dying, and so there was a push to be recognized at the federal level. One Rosie began a letter-writing campaign. Every year, beginning with President Clinton, she wrote a letter asking for the government to do something to commemorate the service these women gave to the country.

After twelve years of writing, a letter finally arrived in Joe Biden’s mailbox. He arranged for Rosies to come to the White House for a special day. They were given a private tour, received hugs from Biden, and were astonished when President Obama spoke to them.

On a recent tour of the Richmond Park, we met four of the Rosies, who all shared their stories. They spoke of the call to serve, the desire to do something for their country. None of them had been employed before, so striking out on this journey was quite an adventure. Two of them became welders after overcoming the prejudice of the union that would not allow women to join. Without a union card, they could not work. Kaiser intervened and the rules changed.

The welders learned to set down seams vertically, horizontally and overhead. They said that overhead was the most challenging. To get to the place where the welding was needed, they crawled through eighteen inch square holes dragging their equipment along. It was dark and hot, but they persevered.

Another Rosie worked drafting blueprints. She enjoyed the work because she knew that if she missed an error in the design, the ship might not be sea-worthy.

Because there are so few Rosies left, we felt blessed to be with them and to hear their stories. 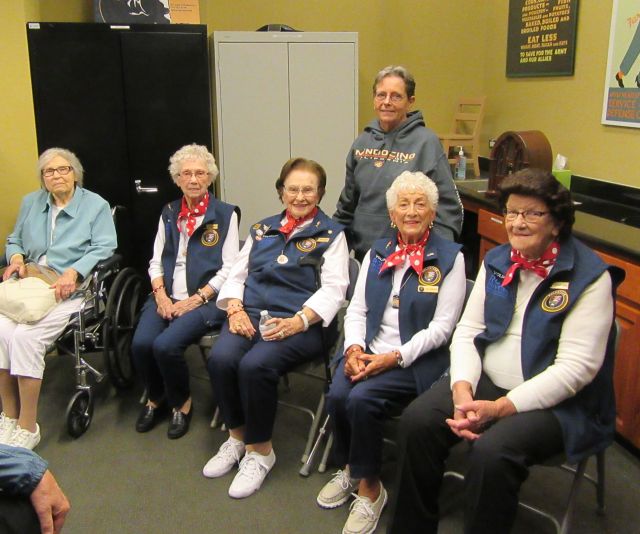 If you get a chance to visit a memorial, stop by. It’s an amazing story.